Home Entertainment Latest Justin Bieber Cancels His Purpose Tour And This Is How The World Reacts
Phili
July 25, 2017

ICYMI, Justin Bieber has just canceled the rest of his Purpose tour dates due to “unforeseen circumstances.” Whaaat?

Justin: 'due to unforseen circumstances the purpose tour is cancelled'
me: pic.twitter.com/n9Bn4InCvF

The Purpose tour has come to an abrupt end, and that’s just a fact—a heartbreaking one—that we’ll have to accept. But before acceptance, of course, there is denial and a whole mix of emotions.

Here’s how shookt the world is about the devastating news.

Raise your hands if this is so you right now.

Justin Bieber fans after hearing he's cancelling the rest of his tour… pic.twitter.com/RhHKwGyggW

Can it be any worse than this…

THIS IS MORE PAINFUL THAN MY BREAKUPS HUHUHU CHAROT #PurposeTourcancelled

But think about the jowas who spent thousands of pesos…

My World Tour: too young to go
Believe Tour: my country isn't part of the tour dates
Purpose Tour: almost but got cancelled😭💔

The concert that got away…

Some were more positive though.

Thank you Justin for sharing your purpose with us worldwide! You deserve all the rest!

In all fairness to the Biebs, the Purpose tour had been going on for soooo long!

us: when is purpose tour gonna end we're ready for the next era
Justin: cancels the rest of purpose tour
us: pic.twitter.com/9vbaXIi6cd

We totally understand that he deserves a break from all his hard work.

But really, we could only wish that we could use the same excuse at work…

“Hey boss, I can no longer come to work due to unforeseen circumstances.”

But wait, did you even have a ticket?

With ticket or no ticket, this is no reason for us to hate and leave the Justin Bieber fandom. Will there ever be any reason at all? We don’t think so! He has, after all, produced countless hits that continue to put us in a good mood. This is an end of an era indeed, but onto the next one! The question is, are we going to get a Purpose tour movie in the near future? *crossing our fingers*

To make you feel better, here’s Justin Bieber saying sorry to everyone—singing rather. We bet you’ll be putting his songs on repeat today!

i think it's the time for a purpose tour movie! pic.twitter.com/eJgoEv7pnw 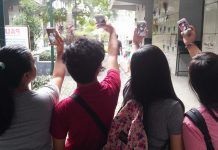 How Many of These Sibling Goals Have You Acco...